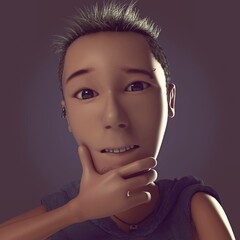 Natural curiosity has always led me to be completely self-taught from a young age. I started the coding journey with Apple IIc, Amiga, then learning 3D softwares such as Real 3D, Imagine & Lightwave. These were the foundations that fostered within me a true passion for this CG industry.

With a few years of training, I acquired enough knowledge in programming & computer graphics to start my professional career in Paris in 1997 on Silicon Graphics with Alias Power Animator & later on Maya.
10 years of experiences in France allowed me to enrich my skills by working for a diverse range of CG demands: advertising, animated series, motion capture & developing pipeline tools.

I moved to Thailand in 2007 & joined my friend to work in a studio where he was 3D supervisor and I was in charge of doing special effects for Thai films & advertisings for Asian countries.
Three years later, we started our own business in Bangkok. In addition to working for advertising, we also specialised in medical animations.
Circumstances meant that two years later I returned to France intermittently doing exclusively medical animations as freelance, until 2018 when I was back to Bangkok to work in advertising for 2 years.

This is when I reached the limitations of what I could achieve with Maya & therefore decided to immerse myself in the secret language of Houdini in 2019, which never ceases to bring me all the artistic and programming possibilities that I had reached with the former software.

Today in April 2022, I’m working for a studio that uses both Maya & Houdini. And I’m in charge of doing all the VFX for the TVCs, as well as developing HDAs and tools to transfer datas between the two softwares.

I will always be extremely grateful for all these 22 years I’ve spent using Maya, I have learned a lot despite the bugs or other untimely crashes, but the enormous potential that Houdini offers to people with both artistic sensibility and programming skills drives us into a unique and infinite universe that will keep nurturing my passion in this industry for the next 20 years